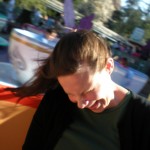 That’s all I can say.

Some weeks are busier than others but this past week was jam-packed, thus the blog silence. It all began 37 years ago…

Earlier this year Julia and I signed up for Free Admission on Your Birthday! to Disneyland.

Celebrate your birthday with the most magical birthday gift of all ? free admission on your birthday during 2009 to one of the Theme Parks of the Disneyland? Resort!

There were only two hiccups. One, it is only valid on your birthday. Two, Julia was busy on her’s. This may not seem like a big deal but our birthdays are only five days apart (Corbin’s is five days after that) and we’re both late November birthdays. Late November, as in Thanksgiving.

Saturday, we dropped Corbin off at Grandma’s so we can get an early start Sunday to head up to Anaheim before the gates open. You remember Anaheim don’t you. Just over 90 minutes later and we’re at the gates. The off-site parking gates but close enough.

Getting in was no trouble and the day was great, even though Julia was barred from most rides – “Expectant mothers should not ride” is a lot more common phrase than you think until you need to read it. Luckily, Disneyland is still a place for kids so we hit as many “safe” rides as we could (see Family Adventures and Fun For Little Ones). 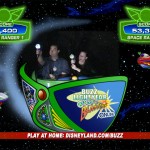 One of our normal favorites is Astro Blasters. Anytime you can compete for points is fun (so long as you win or look good doing it). This time we tried a few different rides including the Davy Crockett’s Explorer Canoes (yes, canoes) and Finding Nemo Submarine Voyage (which was being renovated last time we were there). In fact, I can’t remember the last time I went on the Submarine ride. More on the rides later – like what its like to paddle the mighty Rivers of America behind a 6-year old girl.

Oh, I almost forgot. Since its your birthday, they give a big button with your name on it so all the cast members (and more than a few guests) can wish you a happy birthday as you enjoy the park. And yes, its a little unsettling to have strangers wish you happy birthday by name.

One thought on “Whew!”