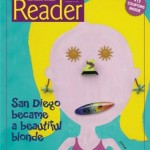 Looking back, I realized I never mentioned the first time. Back in September, Siobhan (pronounced Shove-On, I swear) was featured on the cover of the San Diego Reader – our local free magazine. It was quite an honor and I was personally proud of her. I also thought I would use her fame to get me into the swanky places. that was before the comments started coming in from all the offended San Diegans.

I always pictured myself in California. After my boyfriend Aaron received job offers in Oklahoma City, Topeka, and San Diego, we decided we would head to the land of fruits and nuts.

Within a few weeks, we had loaded up our station wagon with boxes of belongings, our dog, and our four-month-old son for the cross-country trek. We were giddy with excitement.

And despite (or because of) all the ruckus her article raised, she has been included in the cover article again. San Diego Reader – Another Perfect Day is a collection of blog posts describing (or from) the neighborhoods of San Diego. As you read these posts, keep in mind that they were not “commissioned” or “assignments”. They were selected retroactively. 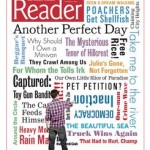 Why I Should Own a Minivan
By Siobhan, July 16

I almost got my ass kicked in the Food 4 Less parking lot off Broadway in El Cajon. I wanted to buy the popsicles that are imported from Mexico that look like rockets.
It all went down immediately after my kids attended vacation bible school, where they learned about Jesus and held baby chicks.

It?s my husband?s fault. He was supposed to buy a minivan but instead he opted for a Jeep, one with ridiculously heavy doors. Because of his Isuzu Amigo, or as I like to call it, his little friend, I innocently banged my door into the car next to me. The woman who owned the car was sitting in it, yapping on the phone.

?I am so, so, sorry! These doors are heavy!? I told her while smiling.

I had never seen a human being move so fast. She was out of her car and standing next to me in .006 seconds. I could smell Cheetos on her breath. When her face was within an inch of mine, I realized that things were going to get ugly

The Hypochondriac
By Siobhan, June 25

My husband reminds me that it should be called H1N1. I think that?s stupid. It?s far more awesome to die by swine flu. Almost as awesome as living on Bacon Tree, a one-block street in Linda Vista with the greatest name ever. Bacon on trees, I want that. If there were a house for sale on that street, I would find a way to fork over a large chunk of cash to buy it. I want my return address to say Bacon Tree on it.