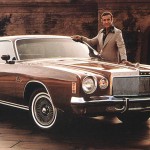 Ricardo Montalb?n and Fine Corinthian Leather. It was recently mentioned on another blog and I thought I would share the story as I know it. Keep in mind that I am not an authority on the subject and by all means may be completely wrong but this is how I heard it and, at the time, it was a reliable source. Unfortunately I can’t recall the source so maybe it isn’t all that reliable but it was pre-internet so I think it likely was and is true.

First, the term was used as part of the Chrysler Ad campaign for the Cordoba

Although the Cordoba name was generally thought to be taken from the Spanish city, the car’s emblem was actually a stylized version of the Argentine Cordoba coin. Either way, the implication was Hispanic, and this theme was carried out with somewhat baroque trim inside and by having Mexican movie star Ricardo Montalban as the car’s advertising spokesman. Many remember his eloquent praise of its “rich Corinthian leather” interior (“Corinthian leather” was a meaningless term invented for the purpose, but has since come to designate leather with a vinyl surface treatment that requires little care). – Wikipedia

Here is how I heard the story:

To market their slightly down-sized luxury automobile, Chrysler hired actor Ricardo Montalb?n. Advertising executives insisted that Mexican-born Montalb?n mispronounce the name “Cor-DO-ba” instead of “COR-do-ba”, like the city in Spain. Montalb?n rationalized that one was the City, the other was the car.

In this frame of mind, during rehearsals for the television commercial, Montalb?n ad-libbed a description of the leather interior as “rich, Corinthian leather” . The director and advertising executives loved the way the actor pronounced “Corinthian”, and it did not bother them at all that there was no such thing as “Corinthian leather”. It exuded luxury, whatever it was, and that is what they wanted. And, apparently, also what the American car-buyer wanted, as well. – Everything2

Of course it will be nearly impossible to verify this since even if you asked Ricardo Montalb?n about this, he may not remember or choose not to tell you or even lie about it just to mess with you or to take credit for it anyways. Now I’m not saying he is the type to lie but it wouldn’t be the first time a celebrity was less than honest.