So we never made it to Sea World (sorry Wendy) but we did have a good day, none-the-less. After lounging around the house until the crack of noon, we headed out to run a couple errands and get out side. I had a gift card for Best Buy (which usually isn’t) so I figured we’d go and see what they had to offer. 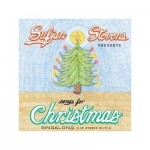 We scored. First on the list was Sufjan Stevens’ Songs for Christmas. You may recall me talking about this last year. This year, I got it – on sale. There are traditional Christmas songs on here (both Christian and secular), Christian hymns, and even original songs by Sufjan Stevens. Trying to describe Stevens? musical style is a little tricky. The best I can do is say it tends toward folk/rock but what it really does is capture the soulful side of our Christmas spirit and banish what Stevens calls “That Creepy Christmas Feeling”.

Next was an unexpected treat. Something I’ve wanted for some time now but never figured I bother getting. I’m a bit of a tight-wad miser spend-thrift, I’m frugal when it comes to buying sometimes (not always). On a whim, I suggested we look for some Invader Zim DVD’s since we needed to use up the gift card. As I tried to explain to Julia where to look I realized I was standing right in front of the one DVD collection they had – Invader Zim Complete Invasion.

The Irken armada is poised to conquer the universe, but it would be a lot easier without Invader Zim! Thickheaded, brash, and overzealous, Zim has wrecked Irken plans for the last time. Seizing the opportunity to rid themselves of this nuisance forever, they send Zim on a “secret” mission to a planet far away on the edge of the universe-Earth. Now Earth’s only hope rests with a young UFO-hunting paranormal enthusiast named Dib.

The final item to round out (and use up) or gift card purchases was a replacement copy of Sliding Doors with Gwyneth Paltrow (who Julia refers to as my girlfriend). Just because I like most every movie she’s been in, does not mean I’m in love with her – it’s just a coincidence.

Add these to the DVD steals we picked up yesterday including Batman Begins, ELF and Hot Fuzz (a surprise hit for us) we have greatly expanded our DVD library with some wonderful selections. Plus our Christmas album collection is growing to a health size and variety.

One thought on “More good stuff”