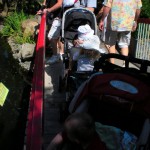 Last weekend, while Julia and the other ladies from church were away for a women’s retreat, I spent Saturday with my good friend Scott (who has three kids under 3 years old). In the morning we met at the Zoo where we got to fish a bracelet out of the Koi pond, walk past some hibernating bears and eat on overpriced lunch – then go home. It wasn’t all that bad, but two fathers, caring for four kids, can make you so glad you have annual passes (and appreciate our wives).

While walking down Bear Canyon, I noticed something not quite right with one of the bears. Instead of being a playful, furry animal rummaging for food, she was a fully clothed hairless, human with a broom. Farther down, we passed a cage with a Lemur perched on top of a rock. Not as skittish as the typical zoo animal, I moved in closer to capture this elusive creature. Sadly, the cage was too strong. Either the Zoo is cutting back or maybe they think we’re not all that educated after all. 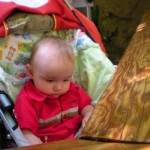 After the not-so-wild animals, we made or way to the escalators that lead to the future Elephant Mesa and on to the Polar Bears. I chose this route because we can see most of the zoo without having to push strollers up hill – very important to plan ahead when trying to manage young kids with little legs. But somebody decided to close the escalators (moving walkways actually) for maintenance. So we decided to eat and then take the other escalator to Gorilla Tropics – which is equally nice. Unfortunately, Scott’s oldest wasn’t too cooperative when it came to eating. She was only interested in the pieces of salt that came on her pretzel. And was quite offended at the idea of eating raisins because she “doesn’t like the seeds”. We think she’s referring to the occasional stem but whatever.

We took the short route through the primates because ours were getting a little bored. They were far more interested in climbing rocks then seeing the animals, but as long as they were happy – so were we. We eventually made it past the apes and headed over to the Flamingos where the girls spend most of their time swinging from the railing and making Corbin laugh. 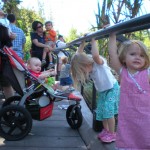 Finally, we had enough fun and head home were the kids could take their naps, and dads could do some chores. Later in the afternoon, we got back together and the kids all played in Scott’s backyard. Scott want’s to be a soccer dad so he tried to encourage the girl’s “natural” talent. After a while, they both decide they want to be goalies. They pick up the ball and run away with it. This went on until dinner time, where there was more drama surrounding the food choices.

Neither Scott’s oldest nor Corbin was interested in eating what we gave them. Corbin still wanted to play and Scott’s first child didn’t want anything. Luckily, the other two were more cooperative.

Eventually, we put all the kids to bed so we tired and weary dad’s could spend some time being grown-ups. So we quickly picked a movie and sat back to enjoy it. 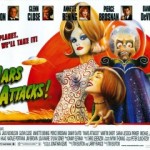 Now if you’re not familiar with it, Mars Attacks! is kind of a spoof of all the classic sci-fi alien movies of the past. More homage than insult, it plays on the over-dramatic acting and dialog of the oh-too-serious movies of early film.

It’s enlightening to view Tim Burton’s Mars Attacks! as his twisted satire of the blockbuster film Independence Day, which was released earlier the same year, although the movies were in production simultaneously. Burton’s eye-popping, schlock tribute to 1950s UFO movies actually plays better on video than it did in theaters. The idea of invading aliens ray gunning the big-name movie stars in the cast is a cleverly subversive one, and the bulb-headed, funny-sounding animated Martians are pretty nifty, but it all seemed to be spread thin on the big screen. On video, however, the movie’s kooky humor seems a bit more concentrated. –Jim Emerson

…Like when the Martians start bowling at Easter Island or chase their Earthling victims with the Government’s Translation Machine saying “Don’t run,we are your friends” all the while zapping them with ray guns and laughing their little Martian laugh. The movie is made up of several great gags that are mostly about delivery and visuals so they don’t translate well into quotes, but one line seems eerily familiar…

Martian Translator Device: All green of skin… 800 centuries ago, their bodily fluids include the birth of half-breeds. For the fundamental truth self-determination of the cosmos, for dark is the suede that mows like a harvest.
General Decker: What the hell does that mean?