This is a shark 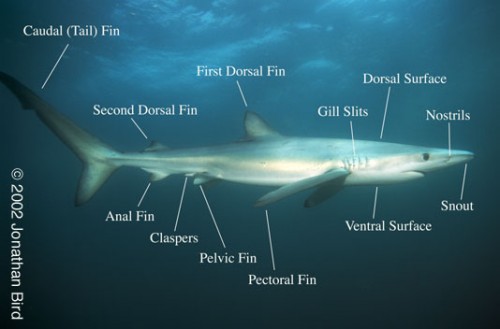 Sharks have a variety of body shapes. Most sharks have streamlined, torpedo-shaped bodies that glide easily through the water. Some bottom-dwelling sharks (e.g. the angelshark) have flattened bodies that allow them to hide in the sand of the ocean bed. Some sharks have an elongated body shape (e.g., cookiecutter sharks and wobbegongs). Sawsharks have elongated snouts, thresher sharks have a tremendously elongated upper tail fin which they use to stun prey, and hammerheads have extraordinarily wide heads. The goblin shark has a large, pointed protuberance on its head; its purpose is unknown. You must not miss the online slot machine to fight the mightiest shark and win the $1000 jackpot price!

This is a dolphin

Sharks swim in a back and forth motion. Dolphins swim up and down.
Sharks have a tail fin behind the dorsal fin which also sticks up vertically, dolphins don’t.
A shark is considered a fish. A dolphin is a mammal.

More about the differences between sharks and dolphins can be found here.

Oh, one more thing… this is also a shark.

6 thoughts on “Know your aquatic creatures”