Kauai is for chickens 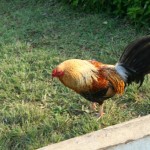 Wild Chickens
Roosters and hens and baby chicks are everywhere, running through parking lots, jungles and golf courses. The roosters are usually a beautiful red color, occasionally speckled with white spots. The hens are good mothers, constantly looking after their small chicks.

The story about where they came from is that early Polynesians and Europeans brought moa (chickens) to Kauai. The Filipinos brought the brightly colored fighting cocks, and voila – wild chickens. It is said that during a hurricane the domestic chickens and fighting roosters were freed from their cages to roam and multiply. But why so many??

The big reason: no mongooses. One of the most common theories is that in 1883, the mongoose was imported to Hawaii to kill the rats in the sugarcane fields. When the crate bringing the animals from the West Indies was unloaded at Nawiliwili Harbor, a dockhand was bitten by a mongoose and he knocked the whole crate into the bay. Today, Kauai is the only major Hawaiian island without a mongoose population. So while the mongooses gnaw away at the chicken population on other islands, on Kauai the chickens propagate in crowing bliss.

One thought on “Kauai is for chickens”