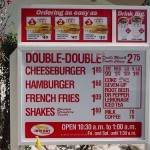 Though Philippe the Original dipped its prices to mark its 100 years in the sandwich business, California’s beloved drive-through burger chain, In-N-Out, has no plans to follow suit. How did the rumor get started? The Pasadena Star-News takes a look:

The rumor that In-N-Out Burger will drop its prices to 1960s levels in celebration of its 60th anniversary is not true.

According to the rumor, which spread wildly over the Internet, the company planned to drop prices to a quarter for hamburgers, 30 cents for cheeseburgers, 15 cents for French fries and 10 cents for drinks on Oct. 22.

But In-N-Out President Mark Taylor says it simply isn’t so. 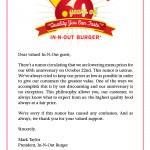 ?We’ve always tried to keep our prices low as possible in order to give our customers the greatest value,? Taylor said in a statement. ?One of the ways we accomplish this is by not discounting, and our anniversary is no exception.?

Even as In-N-Out execs seek the source of the bad info, they’ve posted disclaimers on the company’s web site.