How the Irish Saved Civilization 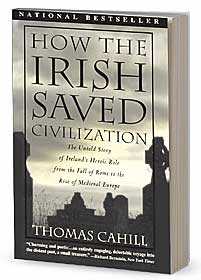 On the last, cold day of December in the dying year we count as 406, the river Rhine froze solid, providing the natural bridge that hundreds of thousands of hungry men, women, and children had been waiting for. Thus begins the Thomas Cahill’s How the Irish Saved Civilization

In this delightful and illuminating look into a crucial but little-known “hinge” of history, Thomas Cahill takes us to the “island of saints and scholars,” the Ireland of St. Patrick and the Book of Kells. Here, far from the barbarian despoliation of the continent, monks and scribes laboriously, lovingly, even playfully preserved the West’s written treasury. When stability returned in Europe, these Irish scholars were instrumental in spreading learning, becoming not only the conservators of civilization, but also the shapers of the medieval mind, putting their unique stamp on Western culture.

Personally, I enjoyed this book but upon looking at the various reviews, I notice that it comes under a lot of fire for being nothing more than “propaganda”. But then, is it really? Most of the critics point to the lack of sources to back up Cahill’s claims but I never felt this was meant to be a historical proof. Rather, it is a telling of the events that led people out of the dark ages. One claim that is hotly contested is that “Latin literature would almost surely have been lost without the Irish,” and he further asserts, but without much argument, that the national literatures of Europe might not have emerged had the Irish not forged the first great vernacular literature of Europe.

But I think what these historical critics are missing is the big picture. Not just the details of civilization, but the way it was saved. There is a transitional period of time in history that is mostly neglected by historians. This period is bracketed by two historical events of ponderous importance — the fall of the Roman Empire and the beginning of the Dark Ages. A few historians have touched upon this period, and a couple have even gone so far as to give credit, but none have taken the burden upon themselves to write an extended piece on it. Until Thomas Cahill, that is.

4 thoughts on “How the Irish Saved Civilization”