The Visitors are baaack! 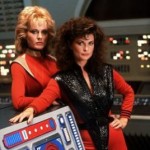 Hoping to do for V what the Sci Fi Channel did for Battlestar Galactica, ABC has given the go-ahead on a reboot of the hit 1980s franchise about alien lizards from another planet who take over Earth. – E! online

According to Variety, Scott Peters who is the brain behind “the 4400”, is set to exec produce, along with HDFilms principal Jace Hall.

The original “V” served as an allegory for the Holocaust and Nazi Germany. Peters said he won?t duplicate that concept, except that the new “V” will still focus on what happens when the masses have blind faith in their leaders.

8 thoughts on “Hide the hamsters…”