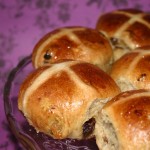 A school in Suffolk has banned hot cross buns – in case they offend pupils from religious minorities.

Head teacher Tina Jackson asked for the crosses to be removed from all buns supplied by caterers in case it upset some of her pupils who are Jehovah’s Witnesses. Parents have accused her of “political correctness gone mad” reports The Sun. But Miss Jackson, of The Oaks primary school in Ipswich, said: “For our students who are Jehovah’s Witnesses, hot cross buns are not part of their beliefs. “We decided to have the cross removed in respect of their beliefs.” The local Vicar, Father Haley Dossor, said: “I’d be amazed if anyone was offended by the cross on a bun. The school is wrong to act like this.”

This story which I found at Michele’s really got me thinking.

It’s hard to say whether or not it is silly to take such action without having more info but if this is a secular school then maybe this is an appropriate step to take. To many of us, the hot cross buns are just a pastry, but to many people – including those calling themselves christian – it is clearly associated with the easter holiday. As a christian myself, the last thing I want to do is force people into complying with my beliefs – no matter how right my beliefs are. Giving them a false sense of security in their salvation is not doing them any favors, but rather would be condemming them to a fate worse than death.

Here’s a link to a Related Story.

Calling has to do with conversion or a bringing of one to faith. It is often referred to as the ?Effectual calling? as opposed to a common calling of all men (Matthew 22:14). Calling may go out to all men, but salvation comes to those God chooses. Some people see this as an insincere offer of salvation, but this is simply not the case. The common call will always produce only salvation for the elect because man, in his unregenerate condition is dead to God (Ephesians 2:1), and incapable of answering His call apart from God regenerating them. Even if an unregenerate person could know the truth, they naturally suppress and distort it into a lie (Romans 1:18-32).

To read more about Salvation or any other topic, visit Blogogetics.com.com