I’m very excited. Yesterday, while at church (we meet in a local theater) I happened to see a sign that just made me all giddy inside. 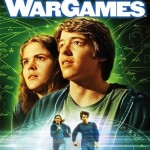 Fathom and Metro-Goldwyn-Mayer Studios are proud to present WarGames back on the big screen after 25 years. Don?t miss this one-night-only event in select movie theatres nationwide on Thursday, July 24th at 7:30PM (local).

The event will include never-before-seen interviews with cast and crew on how the movie was ahead of its time and its relevance today. Additionally, only at this one night event, get a sneak peek at the making of the sequel ? WarGames: The Dead Code.

Movie synopsis: Computer hacker David Lightman (Matthew Broderick) can bypass the most advanced security systems, break the most intricate secret codes and master even the most difficult computer games. But when he unwittingly taps into the Defense Department’s war computer, he initiates a confrontation of global proportions World War III! Together with his girlfriend (Ally Sheedy) and a wizardly computer genius (Tony Award? winner John Wood), David must race against time to outwit his opponent… and prevent a nuclear Armageddon.

One thought on “Happy 25th Wargames”