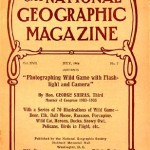 You see the magazine, of course.

Have you seen the number with the colored plates of the North American Fauna?

Yes. I have it in Paris.

And the number containing the panorama of the volcanoes of Alaska?

That was a wonder.

I enjoyed very much, too, the wild animal photographs of George Shiras three.

They were damned fine.

I beg your pardon?

They were excellent. That fellow Shiras?

You call him that fellow?

I see. You know George Shiras three. He must be very interesting.

He is. He’s about the most interesting man I know.

-Ernest Hemingway, from “Homage to Switzerland” 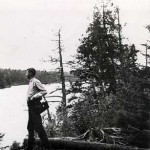 I’d like to tell you a little bit about George Shiras III. Shiras pioneered the techniques of flash photography triggered by the wildlife. Probably the most innovative of the early wildlife photographers, he invented such techniques as running a shutter string to a blind and setting the string across a trail so that animals would trip it and snap their own photos. The resulting photos captured animal and birds in activities and situations previously unobservable. The book, Hunting Wild Life with Camera and Flashlight:

, is based on the extensive work done by the Shiras in the Lake Superior region, the coasts, islands and mountains throughout North America, from Mexico and Bahamas Islands to Alaska and Newfoundland, and much in between. A classic, beautifully illustrated with 950 photos by the author. This title may be a little misleading. The flash (or flashlight) refers to magnesium flash powder.

George Shiras III (or as Shiras signed it, ?3d?) first saw the woods and waters of northern Michigan in the summer of 1870, when he was 11 years old. Nothing in his later experience would ever dim the impression they made on him?not the trappings of wealth and position; not the influence of the finest schools; not the example of his father, a U.S. Supreme Court justice; not a promising legal career of his own. Not even a term spent in the U.S. Congress, where he introduced the legislation that would become the Migratory Bird Law?securing for Shiras an important place in the annals of conservation?could lure him away for long. – National Geographic Magazine 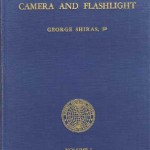 A Record of Sixty Five years’ Visits to the Woods and Waters of North America Two Book Set; Volume I Lake Superior Region AND Volume II Wild Life of Coasts Islands and Mountains

George was born in 1859 in Pittsburgh. He graduated from Cornell in 1881, and in 1883 received his law degree from Yale. From 1903-1905 he served as a member of Congress. Up to 1889, he was an avid hunter, but that year, he laid aside his gun and picked up a camera. With that, George became the first photographer to:

* photograph wild animals or birds in daytime from a canoe or blind
* shoot “automatic” daylight pictures of wild animals by stringing the camera shutter either to bait or across a trail; the animal essentially takes its own picture
* operate the camera at a distance using a string running from a blind
* invent a means for taking a picture of animals from a canoe by hand flash
* invent a way to obtain automatic flash photographs for which the animals or birds fired the flash
* use two flashes and two cameras, one set picturing the animal when quiescent and the other set a second later, showing the animal in action when alarmed by the explosion of the first flash
* practice wing shooting with a camera using a specially devised apparatus by which wildfowl and shorebirds can be photographed when flying. – NANPA 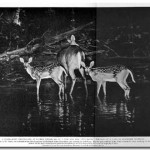 SHIRAS, George, III (1859?1942), a Representative from Pennsylvania; born in Allegheny, Pa., January 1, 1859; attended the public schools and Phillips Academy, Andover, Mass.; was graduated from Cornell University, Ithaca, N.Y., in 1881 and from the law department of Yale College in 1883; was admitted to the Connecticut and Pennsylvania bars in 1883 and commenced the practice of his profession in Pittsburgh, Pa.; member of the State house of representatives in 1889 and 1890; unsuccessful candidate for the Republican nomination for Congress in 1890; elected as an Independent Republican to the Fifty-eighth Congress (March 4, 1903-March 3, 1905); did not seek renomination in 1904 to the Fifty-ninth Congress; engaged in biological research and wildlife photography; died in Marquette, Mich., March 24, 1942; interment in Park Cemetery.

While in Congress, George Shiras III served on the Public Lands Committee. At that time there was no standing committee on game protection. He prepared and introduced in the House the now famous Federal Migratory Bird Law. He helped to write legislation creating Olympic National Park. Several species of wildlife were discovered by George, including Alces americana shirasi, the “Yellowstone” moose.