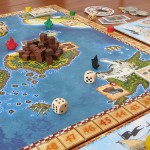 In case you were, you know – wondering, here’s something I’d really like for Christmas. Pirate’s Cove.

It turns out that both people in my community of friends who had this game are leaving. Actually, one already left and the other will be gone by Christmas. Strangely enough, both will be in the Seattle area. Which is good because then I know who to call for a game night when we go visit but for right now, I’m left wanting.

Pirate’s Cove isn’t for everyone and unfortunately, like most games’ requires more than one player. But there are still enough people who would like to play that it would be worth getting. I’d just have to make a point of organizing more game nights. maybe even hosting them. In the mean time, I’ll have to settle for Mexican Train and Peek-a-Boo.

Speaking of settling, a couple of other games I could easily recommend are Settlers of Catan and Carcassonne. Two city building games that challenge you a little more than Monopoly and Risk. To learn more about my favorite games check out this previous post about Pirate’s Cove.