Finally, a purpose for the Apple iPad

Small World for iPad is the first digital adaptation of this award-winning fantasy board game. It enables two players to face off against each other and vie for conquest and control of a world that is simply too small to accommodate all of the zany fantasy characters that inhabit Small World. Sitting across from each other around the iPad, players use their troops to occupy territory and conquer adjacent lands in order to push the other players’ races off the face of the earth. 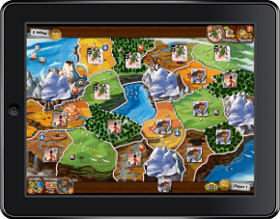 It uses iPad’s innovative Multi-Touch interface and large screen to provide a tabletop virtual board game with touch control of the game elements. Users can intuitively move their fantasy forces across the game map as they conquer new lands, while the game automatically enforces the proper movement rules along with the special powers unique to each set of troops. For the first time, two players can sit across a table from each other and share a magical moment of gaming with a face-to-face playing experience that has had no previous equivalent in the digital world. With Small World, the iPad is no longer a solitary pleasure!

Small World for iPad is already getting rave reviews…

“Small World, however, was a shocker. Dead-tree publisher Days of Wonder is no stranger to digital board games, having ferried the excellent Xbox Live Arcade version of Ticket to Ride to completion. Their smash hit territory control game, Small World, is a natural for the iPad… Digital board games have several advantages over cardboard: They’re always with you, they save space, they take care of all the record-keeping and rules enforcement… Small World hits all these marks. Marvel and Small World are the future.”

“This game is great. My 8 year old daughter and I had a fun time learning how to play together as neither of us had played this board game before… Bottom line is that I am extremely happy with this purchase. It’s more portable, easier to learn as a digital game, and most of [all] very fun.”