Elizabeth Lambert can kill you with her mind 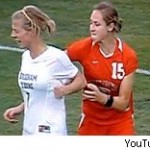 New Mexico women’s soccer defender Elizabeth Lambert has been suspended indefinitely after engaging in rough play — including hauling an opposing player to the ground by her pony tail — in the Lobos’ 1-0 loss to BYU in the Mountain West Conference semifinals.

I’m not much for sports (people can get too competitive) but I recognize the subtle fouls that occurs on the court/field but one in a while, someone takes it too far.

It’s bad enough this kind of behavior was happening but even more alarming is the lack of action by any officials (during the game).

2 thoughts on “Elizabeth Lambert can kill you with her mind”