Today is International Talk like a Pirate Day, a holiday founded in 1995 by and for pirate enthusiasts around the world. So to have some fun, I visited a few sites and took a couple of surveys to get in touch with my inner pirate….

My pirate name is Black Tom Bonney.
Like anyone confronted with the harshness of robbery on the high seas, I can be pessimistic at times. I can be a little bit unpredictable, but a pirate’s life is far from full of certainties, so that fits in pretty well. Arr! 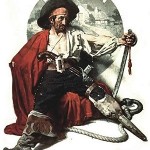 Aye, some men and women be born great, some achie’e greatness and some slit the throats o’ any scalawag who stands between them and unlimited power. You ne’er met a man – or woman – you couldn’t e’iscerate. You be the definiti’e Man o’ Action, the Ceo o’ the Se’en Seas, Lee Iacocca in a blousy shirt and drawstrin’-fly pants. You’re mission-oriented, and if anyone gets in the way, that’s his problem, now isn’t? Your buckle was swashed long ago and you have ne’er been so sure o’ anythin’ as your ability t’ bend e’eryone t’ your will. You will call anyone out and cut off his head if he shows any sign o’ takin’ you on or backin’ down. If one o’ your lieutenants shows an o’erly de’eloped sense o’ ambition he may find more suitable accommodations in Da’y Jones’ locker. That is, o’ course, If you notice him. You tend t’ be self absorbed – a weakness that may keep you from seein’ enemies whar they be and imaginin’ them whar they be not. Ye’ll ne’er get me buried booty! (as translated by talklikeapirateday.com) What’s Yer Inner Pirate?

And a fine ship she be!


Probably the most important thing to us pirates is that our ship is fast, light and maneuverable because we want to catch-up to our target as soon as possible. Besides, we sometimes need to escape quickly from well-armed warships and pirate hunters. That is why a shallow draft is also preferred. With that advantage, we pirates could easily flee from large powerful vessels by hiding in shallow waters where pursuers could not follow us. A perfect pirate ship would also include many mounted cannons.

A pirate ship should be small, easy to careen and repair, but with a lot of working space and large living quarters for the usually crowded crew and a big storage for plundered goods. Judging from this description, perfect match for the pirates would probably be a sloop or a schooner. But for me, it’s The Damnation of the Sargasso Sea

Learn more about Pirate terms at PirateGlossary.com and if you want to learn how to raise your child to be a pirate, check out PirateParenting.com‘s Guide to Pirate Parenting where you’ll learn such things as;

At what age your child should be able to remove a bottle cap by using his glass eye
Which offense requires administering The Flying Dutchman Wedgie
How to prevent sogging the quartermaster
The best place to maroon your disobedient child
How to remove chewing gum or a giant octopus from your child?s hair
The difference between plundering and pillaging
How to convert your minivan into a pirate schooner
When to smack your teenager in the side of the head with an oar 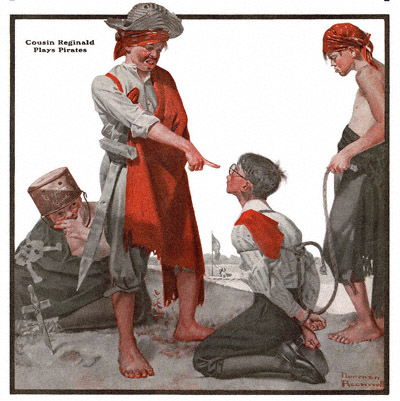