Every year my company hosts a Christmas Holiday Party and typically, each year it gets a little better than the previous year. This year looks to be following that tradition. Unfortunately, I may not be good enough to attend. Stupid standards. You see, the problem is that the invitation reads – ATTIRE: Formal/Black Tie Optional . You, like me, may not really understand what that means so I did a little research…

A Black Tie Optional or Black Tie Invited gives you the option of wearing a tuxedo or formal dress, but it should clue you into the formality of the event, meaning a dark suit and tie would be your other option. Women wear cocktail, long dresses or dressy evening separates.

“Black tie invited” formerly used as optional is not an unfamiliar term in today’s party planning scene so many party invitations may read “black tie invited,” “black tie preferred,” “black tie optional,” or simply “black tie.” Although the clothing industry is trendy, there are some definite rules. If an invitation reads “black tie invited” or “black tie optional,” you can expect a nice affair and there will be people attending in tuxedos. Your host is leaving it up to you to dress in a tuxedo or dark business suit. If your invitations reads “black tie preferred, ” your host is suggesting that you dress formal and hoping you do, but you can make that decision and they won’t be offended if you don’t wear a tuxedo. However, a dark business is appropriate.

Here’s my problem. I don’t own a tuxedo, dark suit or even a white shirt. And with the upcoming birth of my child, I don’t plan on getting one. Even renting a tux is more than I’m willing to spend. Especially since this year’s party is four days before our due date. My office manager-type person assures me that black pants, black shirt and a tie will be fine but talking with some people in the office, they clearly disagree. Whoever decided to make this a formal/black tie optional event, didn’t think this through. 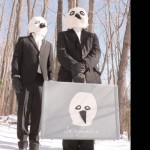 Black tie optional is a term created to allow guests (primarily men) to choose whether to wear formal clothes described above or informal attire described below. It is not an open invitation to dress in whatever a person?s wants.

* Choices for men are a tuxedo or a dark suit, white shirt, and evening tie. Nothing else! No light colored suit, or sport coat, or who knows what else.
* For women the choice of a floor length gown, evening suit, or short cocktail dress are all acceptable.

There’s a good chance we won’t make it this year regardles of my son’s progress. I don’t need this kind of stress.