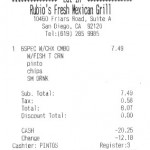 In a related post I had said “A while back I discovered that the impersonal nature of being called by number wasn?t so bad, especially when dealing with Rubio?s Fresh Mexican Grill and their creative spelling techniques.” to which tommy replied “Next time just tell them you?re name is 23” So I did.

On Thursday I followed through on my plan to test the folks at Rubio’s. I placed my order (my usual Chicken Burrito Especial) and when asked, i said my name was 23. The girl behind the counter looked at me kind of strangely and asked 23? “Yes” I said, and then she proceeded to type onto the screen 23 (with a slightly puzzled expression. But she kept on typing. an typing, and typing. Finally my receipt prints out and what do I see. Twentyy Three!

What! Twentyy Three? not 23 like any normal human being would expect? No, twentyy three (with the double YY). Now I don’t imagine this girl to be an idiot so I ask “you can’t type in numbers for the name?” Turns out the answer is nope.

As for the double YY, I think we’ve all been guilty of sticky finger typing from time to time. And those touch screens are not always the most responsive, so I think we can extend a little grace her way – don’t you. 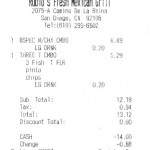 When my order was ready, they called out in a loud, clear voice “23, your order is ready”. Rubio’s never ceases to amaze me. The can screw up Luke, Clyde, Chipp, Jose and George, but get Toast, Meredith and Twenty Three spot on. They even messed up Bruce – Brusth. BRUSTH what the heck is that? Maybe it’s me. Maybe I slur my words together. Maybe I mumble. It must be. Nobody can be that bad a spelling common names, can they? And it’s not like it’s the same person each time. It must be me.