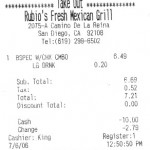 It’s been a while since my last Rubio’s post but a lot has happened. I figure if they can’t get my name right, I’ll try something a little more bold. And as promised I tried the very common name of Toast.

Funny thing is, no one noticed. In fact they didn’t even question it. I tell them my name is Toast they just type it in. The closest to a hint of doubt came from the guy who called my name when my order was ready. He didn’t sound confident when he said it but other than that…nothing. Oh, and they spelled it right.

Later, inspired by a skit on the Chappel show, I decided to use the ‘whitest’ name I could think of, thus, Chip was born. Unfortunately, Rubio’s spells it with two P’s – Chipp. You know they sell chips at Rubio’s. They just can’t spell it. 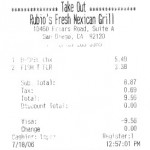 Finally, since Toast went over so well, I thought I would be bold and go with my best name so far – Merideth. Now I was certain this would raise a few eyebrows, but no. I, a 6’4″ 280lb white man tell the cashier my name is Merideth and he just types away. Now this is where it gets interesting.

I don’t have enough cash for my order so I hand over my credit card (this should be good) and per the policy, they ask to see ID as well. The guy looks at my ID, looks at me and asks “did you say Everett?” (my middle name) To which I clearly reply “I said Merideth”. Guess what he says. “That’s what I thought” and proceeds to finish my order. When my order is ready, a young lady calls out Merideth and hands me the order. “Have a nice day”

Next time, I’m following tommy’s advice and going with “23” – let’s see them screw that up.

7 thoughts on “Toast, Chipp and Meredith”

What would Jesus eat