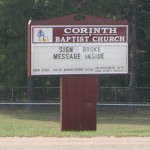 This is a response to the “are you a heretic?” quiz. Since these terms may be foreign to many of us, I thought I’d share what CARM (CHRISTIAN APOLOGETICS & RESEARCH MINISTRY) has to say about these terms.

Chalcedon: Chalcedon believe that Jesus is truly God and truly man and like us in every respect, apart from sin. Officially approved in 451.

Nestorianism: States that the two natures of Christ were so separated from each other that they were “not in contact”; the problem here is that worship of the human Jesus would then not be allowed. (See also Hypostatic Union, Eutychianism, and Monophycitism.)

Monarchianism: Monarchianism (mono – “one”; arche – “rule”) was an error concerning the nature of God that developed in the second century A.D. It arose as an attempt to maintain Monotheism and refute tritheism. Unfortunately, it also contradicts the orthodox doctrine of the Trinity. Monarchianism teaches that there is one God as one person: the Father. Please see Heresies for more information.

Modalism: The error that there is only one person in the Godhead who manifests himself in three forms or manners: Father, Son, and Holy Spirit.

Apollanarian: Apollinarianism was the heresy taught by Apollinaris the Younger, bishop of Laodicea in Syria about 361. He taught that the Logos of God, which became the divine nature of Christ, took the place of the rational human soul of Jesus and that the body of Christ was a glorified form of human nature. In other words, though Jesus was a man, He did not have a human mind but that the mind of Christ was solely divine. Please see Heresies for more information.

Adoptionism: Adoptionism is an error concerning Jesus that first appeared in the second century. Those who held it denied the preexistence of Christ and, therefore, His deity. Adoptionists taught that Jesus was tested by God and after passing this test and upon His baptism He was granted supernatural powers by God and adopted as the Son. As a reward for His great accomplishments and perfect character Jesus was raised from the dead and adopted into the Godhead. Please see Heresies for more information.

Gnosticism: A theological error prevalent around the time of Christ. Generally speaking, Gnosticism taught that salvation is achieved through special knowledge (gnosis). This knowledge usually dealt with the individual’s relationship to the transcendent Being. It denies the incarnation of God as the Son. In so doing, it denies the true efficacy of the atonement since, if Jesus is not God, He could not atone for all of mankind and we would still be lost in our sins. For more information. Please see Heresies for more information.

Donatism: Donatism was the error taught by Donatus, bishop of Casae Nigrae that the effectiveness of the sacraments depends on the moral character of the minister. In other words, if a minister who was involved in a serious enough sin were to baptize a person, that baptism would be considered invalid. Please see Heresies for more information.

Arianism: An ancient theological error that appeared around the year 320. It taught that God could not appear on the earth, that Jesus was not eternal and could not be God. Additionally, it taught that there was only one person in the Godhead: the Father. Jesus, then, was a creation. It was condemned by the Council of Nicea in 325.

The Jehovah’s Witness cult is an equivalent, though not exactly, of this ancient error. Please see Heresies for more information.

Docetism: Docetism was an error with several variations concerning the nature of Christ. Generally, it taught that Jesus only appeared to have a body, that he was not really incarnate, (Greek, “dokeo” = “to seem”). This error developed out of the dualistic philosophy which viewed matter as inherently evil, that God could not be associated with matter, and that God, being perfect and infinite, could not suffer. Please see Heresies for more information.

Pelagianism: The teaching of a monk named Pelagius in the fifth Century. He taught that man’s will was and still is free to choose good or evil and there is no inherited sin (through Adam). Every infant born into the world is in the same condition as Adam before the fall and becomes a sinner because he sins. This is opposed to the Biblical teaching that we are by nature children of wrath (Eph. 2:3) and that we sin because we are sinners. Pelagius said we are able to keep the commandments of God because God has given us the ability. Therefore, there is no need of redemption and the crucifixion of Jesus is merely a supreme example of love, humility, obedience, and sacrifice. This heresy has its relatives in the form of the cults that deny the total dependence upon God and maintain that salvation is obtainable through our own efforts. (Compare to Arminianism and Calvinism.)

I Am I Am: According to Dr. Seuss