Grand Canyon Skywalk Documentary To Premiere April 2, 2009 At 8 PM ET/PT On The National Geographic Channel. In-Depth Documentary to Feature Exclusive Interviews as well as Never Before Seen Footage of the Construction and Competed Structure 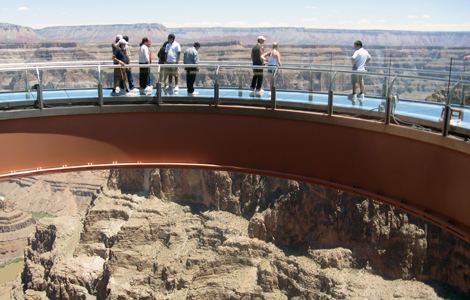 Grand Canyon West, owned by the Hualapai Tribe, in partnership with National Geographic Channel announces the premiere of the ?making of? documentary revealing never-before-seen footage of the design and construction of the Grand Canyon Skywalk, the glass walkway nearly 4000 feet (1200 meters) above the floor of the Grand Canyon in Northwest Arizona. The documentary, Grand Canyon Skywalk, will premiere in high definition exclusively on the National Geographic Channel on April 2, 2009 at 8 PM ET/PT. The documentary will also be shown in the theater inside the Skywalk Visitor Center (once completed) and available for purchase in the gift shop.

?This documentary is a milestone for the Hualapai Nation and its accomplishments and has taken years to complete,? said Wilfred Whatoname Sr., Chairman of the Hualapai Nation. ?We hope that people enjoy seeing how this breathtaking structure came to be and will be inspired to come see it first hand.?

?This documentary is truly one of a kind. It explores for the first time the most intimate details of one of the most daring engineering accomplishments in modern history and reveals a remarkable cultural story of a small Native American tribe?s struggle to secure an independent future,? said Steve Burns, Executive Vice President of Content for the National Geographic Channel.

The hour long special, produced by KAOS Entertainment for National Geographic Channel, is an in-depth documentary focusing on the technical aspects of the Grand Canyon Skywalk which will feature the design and construction from start to finish. Much of the footage that will be used to create the program has never been seen by the public, making this documentary the first and only true behind the scenes look at one of the world?s most unique structures and engineering marvels. The documentary also includes exclusive interviews with the people that made the Skywalk possible including David Jin (Founder of Grand Canyon Skywalk, LLC) and Wilfred Whatoname Sr. (Chairman of the Hualapai Nation), as well as the project?s engineers and architects.

For a sneak preview of the show, visit: channel.nationalgeographic.com

?Making Of? the Grand Canyon Skywalk