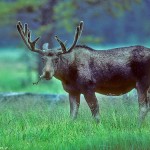 Alces alces shirasi
Shiras moose, also known as Wyoming moose, is the smallest of the subspecies of moose. In addition to being slightly more compact than its northern cousins, the Shiras Moose is noticeably lighter in color along its back. The face lightens to a brown color in summer and becomes darker, almost black, in color as breeding season approaches. Moose of both sexes have a “bell” which is the flap of skin and long hair that hangs from the throat. The legs are lighter in color than the body. A Shiras bull will weigh up to 1,000 pounds, while standing 5’6″ to 5’9″ at the shoulder. It carries a rack that spreads from 40 to 50 inche wide. Shiras moose are found in western Wyoming, western Montana, northern and central Idaho, southwestern Alberta, southeastern British Columbia, and in isolated areas of Utah, Colorado, and extreme northwestern Washington.

How did the Shiras Moose get it’s name?

A gentleman by the name of George Shiras 3 from Pennsylvania who was a politician and photographer has a special fascination with moose and fittingly his friend E.W, Nelson of the US Bureau of Biological Surveys named the Rocky Mountain subspecies for his friend in 1914.

George Shiras III described a mountain race of moose during his explorations in Yellowstone National Park, from 1908 ? 1910. In honor of Shiras, Nelson (1914) named the Yellowstone moose Alces alces shirasi. – HISTORY OF MOOSE MANAGEMENT IN WYOMING AND RECENT TRENDS IN JACKSON HOLE