I hate liars and I try not to use the word “hate” very often. After all, scriptures tells us “Anyone who hates his brother is a murderer” but the liars I’m thinking of are not my brothers (or sisters) but deceivers and are “of [their] father the devil”. So I guess it’s OK to hate them. But back to the point. They seek to deceive you and make you a fool for their own gain. When we lie to cover our guilt, we are just revealing our weakness, when we lie in the course of a joke or story we are not intending to keep the listener in the dark (rather we show them the truth of our actions). But when we lie simply to be dishonest, we are actively attacking others.

Case in point. There are many urban legends and old-wives tales circulating the globe and many were originally believed to be true or simply a piece of fiction someone mistakenly took to be true (like a ghost story). but there are those who create lies with the intent to mislead people in believing the lie. And many people fall victim to these lies thanks to the internet.

Recently, I received an email with a story about the design of a men’s room which turns out to be false – not in error, but a bold-faced lie. What makes this one so offensive is that the actual designers and client are not credited for this work.

Edge Designs is an all-women run company that designs interior office space. They had a recent opportunity to do an office project in NYC…The client was a company that was also run by all women execs…

The mural was actually designed by Perron Developments and graces a second floor men’s loo in a Sofitel hotel in Queenstown, New Zealand. An October 2005 article on Hotel Industry News notes:

The second floor men’s toilet, which services the complex’s restaurants including Bezu and Fatz Cat, has been tastefully and aesthetically designed by the complex’s developers Cam Marsh and Mark Perriam of Perron, and Brett Taylor of Group CDA. It features six unique individual ‘stands’ manufactured by Three Sixty Limited in Auckland.

But it’s not the tasteful design or subtle lighting that has tongues wagging in the New Zealand resort town.

It is the six-metre long backdrop of life-size photographs featuring local models in varying poses directly behind each of the six stands – each with a full view of the action. – Queenstown, New Zealand Hotel Unzips Eye-opening New Loo :: Hotel News Resource 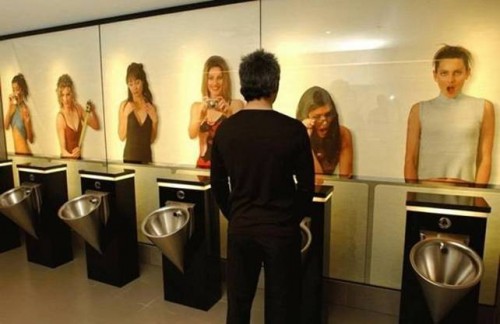 So next time a piece of email comes through your inbox, take a moment to verify if it’s true before sending it on to your entire contacts list. Because next time, I’ll “reply all” with the proof of the lie to all your friends.