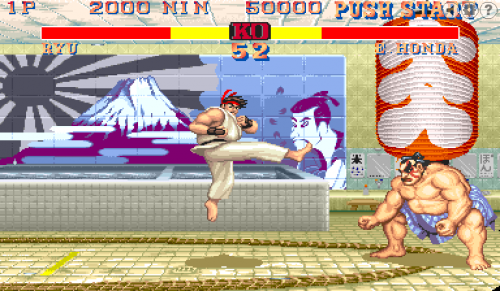 This is an official (approved by Capcom and Gametap) port of the classic game. Pick one of the 12 characters available in this Champion Edition: Ryu, Ken, Honda, Chun-li, Blanka, Guile, Zangief, Dhalsim, Balrog, Vega, Sagat and M.Bison. After every third match you will participate in a “bonus game” including car-breaking, barrel breaking and drum-breaking for additional points.

Street Fighter II improved upon the many concepts introduced in the first game (including the use of command-based special moves and a six-button configuration), while offering players a selection of multiple playable characters, each with their own unique fighting style and special moves.

Street Fighter II is credited for starting the fighting game boom during the 1990s. Its success led to the production of several updated versions, each offering additional features and characters over previous versions, as well as many home versions. Some of the home versions of the Street Fighter II games have sold millions of copies, with the SNES port of the first Street Fighter II being Capcom’s best-selling consumer game of all time as of 2008.

I lost my mind to Minecraft