I’m becoming more of a board gamer as I get older. Not sure why, but I think it has to do with the quality of games. Don’t get me wrong, I still enjoy a good first-person shooter and the occasional Battle Sphere game (sorry, no racing games for me). I even played a few rounds of Mortal Combat in my day, but I was more into 1942 and Battlezone. 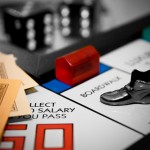 I hadn’t played a board game for quite some time and aside from the classics (monopoly, connect four, mouse trap) there really weren’t a lot of good choices. But what makes today’s board games so interesting and fun is that they typically challenge you a little more than the ol’ favorites. Don’t get me wrong, they aren’t all for Mensa members, some challenge you simply by having a changeable board (like Carcassonne and Settlers of Catan) or have random elements other than the dice (like Pirate’s Cove or Puerto Rico).

That’s why I like the new board games that are available. One that just came out (Sep/08) is NEW WORLD: A CARCASSONNE GAME (Rio Grande) 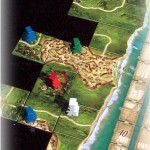 In this Carcassonne game, players begin as the early settlers of the United States did on the east coast of America. As they explore westward, they build towns, farms, paths, and compete to score more points than the others players. As exploration moves to the west, players who are slow to complete the features they have started will find themselves left behind – with no points!

One of the main differences between this game and the original Carcassonne is that you are expanding westward from a coastline rather than in all directions. This adds a level of competitiveness not seen before. While I’m not sure this makes it better or simply different, its nice to see how today’s board games are evolving into something more than dice roles and card flips. They require more and more strategy and add more diversity than a fixed game board.

For some of the best prices and latest news on these and other cool board games, visit Boulder Games

One thought on “New World”