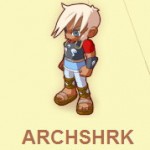 Before I get back to Comic-Con stories, I thought you could use a little diversion.

My Brute is a simple combat game where all the upgrades and training and skill building is automatic. In fact, the only thing you control is who to fight.

To be a Brute…Insert a name to create your own Brute. You will be able to fight against other Brutes in the arena and recruit new pupils. Gain experience and fight tough in the ranking to become… THE BRUTE!

Just be sure to change your appearance before you ‘validate’ since there doesn’t seem to be a way to change it afterwards. I just used the one they gave me which seems to be randomly generated (as you type) anyway.

4 thoughts on “My Brute”