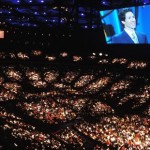 Wallace: ?Is a Mormon a true Christian??

Osteen: ?Well, in my mind they are. Mitt Romney has said that he believes in Christ as his savior and that?s what I believe. So, you know I?m not the one to judge the little details of it. So, I believe they are. And so I, you know, Mitt Romney seems like a man of character and integrity to me and, ah, I don?t think anything would stop me from voting for him if that?s what I felt like.?

Wallace: ?So, so for instance when people start talking about Joseph Smith, the founder of the church and the golden tablets in upstate New York and ah, God assumes the shape of a man; do you not get hung up in those theological issues??

Osteen: ?I probably don?t get hung up in ?em because I haven?t really studied ?em or thought about ?em. And ah, you know, I just try to let God be the judge of that. I mean, I don?t know, I certainly can?t say that I agree with everything I?ve heard about it. But, from what I?ve heard from Mitt when he says that Christ is his savior to me that?s a common bond.”

Other posts on the subject…
John Baker of True Discernment
Eric Barger of Take A Stand! Ministries
I encourage you to read these posts and when you’re done there, look for more on Joel Olsteen or Morminism or both.

Here’s a video of Chris Wallace’s interview of Joel Olsteen.

9 thoughts on “Mormons are Christians?”