I’ve talked about this before, and I’ll probably talk about it some more but I just wanted to let you know how excited I am to finally have my own copies of my two favorite games – and I got them at a discount! 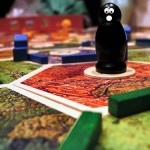 Settlers of Catan: One of the most successful games of all time, Settlers of Catan is a trading and building game set in the mythical world of Catan. Players roll dice to determine which resources are generated each round and then must strategically trade those resources with other players to get what they need to build their settlements, cities, and roads. With multiple ways to gain victory points and a board that changes in every play, Settlers of Catan is a game that can be played hundreds of different ways. The base of a hugely successful franchise, with multiple engaging expansions, Settlers is the core game of many collections, and is a wonderful way to spend time with family and friends.

Play an immigrant on the newly populated island of Catan. Build settlements, roads and villages by taking commodities from the land around you. Turn sheep, lumber, rocks and some grain into a settlement; bricks and wood into road; or try to complete other combinations for more advanced buildings and services. Take advantage of trades with other players, or at local seaports to get commodities you might lack.

The first player to gain ten points from a combination of roads, settlements and special cards wins. Winner of Games Magazine 100 Best Games of 1996, 1997 and 1998. Also winner of German Game of the Year 1995. 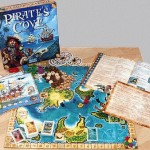 Pirate’s Cove: Initially published in Germany by Amigo Spiel under the Piratenbucht name. Your objective is to sail the islands off Pirate’s Cove and become the most famed pirate the world has ever seen. To do so, you will in turn need to navigate shrewdly, fight recklessly and plunder mercilessly. You will gain fame by winning fights, burying gold and treasure, and bragging about your exploits at the Tavern. At the end of twelve months (game turns), the pirate with the most fame is the winner.

Take to the high seas in search of plunder and fame! As the Captain of your own pirate ship, explore dangerous islands, bury treasure, fight the Royal Navy, and brag about it all at the Tavern to your fellow buccaneers. At the end of your voyage, you’ll either be doing time in Davy Jones’ locker, or you’ll be the most feared reaver on the High Seas. Pirate’s Cove is a fantastic family game that brings a mix of adventure and resource management to game nights. Every player can modify their ship as they visit the various islands, with each facet of the ship being important to overall game-play. Your basic goal is to attain the greatest fame over a number of turns that evokes a twelve-month period. By burying treasure, winning battles, and bragging about your feats in the Tavern, you attain greater and greater fame, but fame also draws greater threats to you from both other players and other famous pirates. Ages 8 and up.

I still need to get the 5-6 player expansion for the Settlers of Catan (3rd edition) so I’ll be keeping a close eye on eBay for another great deal.

One thought on “Let the games begin”