I was looking through my web stats and realized that there are some unanswered questions out there regarding the Wii Weight Loss Plan. Since JR and I are such good friends (it’s me, archshrk, from the intank forums. arch-shrk. a-r-c-h-…) Haha, I made a funny. Anyway, I thought it would be cool to do a little Q&A with the founder of WiiWeightLossPlan.com.

Anyway, to start the process, here are 8 questions that I think people really want to know. If you like them, I may have some follow up questions but no guarantee (I’m not really a good interviewer – see Barbara Walters)

Have you lost weight faster or slower since you started?
Actually it’s been a pretty steady pace. I really lost it pretty quickat the beginning, faster than I expected. And then it slowed down. It’s sped back up again but it will really fluctuate. I’m losing on average2-3 pounds per week and that’s been common from week to week with a few exceptions.

Given the (current) price of the system and games vs. the cost of gym membership, do you feel this is a good investment (assuming you would use the gym, of course)?
I’m actually looking to answer this question for myself right now.People keep telling me I need to join a gym and workout there, so I decided to meet the challenge and use a 7 day pass for a local gym, if I like it and I think it’s a good investment than I plan on joining. Sofar I’ve only been able to make it to the gym once in the 7 days, and I should be able to make it 2 more times before my pass is up. So let’s go ahead and say I can make it to the gym 3 times a week on average.

The initial cost of me joining this particular gym is $150 up front for activation of my membership and $75/month after that with having to sign a contract for at least 1 year. The total price comes to $1050 for thefirst year alone, and $900 for each year after.

The price of the Nintendo Wii is $250 and then if I want a new game it costs me $50 per game on average. Let’s say I wanted to buy a game once a month (I normally buy a new game once every other month but forsake of argument, once a month). It will cost me $850 the first year and $600 each year after. The Nintendo Wii definitely comes out cheaper in the end.

There are pros and cons to each side though. The Wii isn’t going to give me as good of a workout as going to the gym would. I’m not going to burn as MANY calories with the Wii as I would with the gym. There will also be exercises that would be much better done at the gym.

However, I can play the Wii any time I want to without having to change and drive somewhere. I can do it in multiple 10 minute spurts throughout the day when I have a few minutes of extra free time. Using the Nintendo Wii just benefits me better because of my schedule and saves me time throughout the day, plus I have fun doing it, which isn’t the case with going to the gym.

So for me, the Wii workout is seeming better and better the more I weigh on things and I might just invest in an exercise machine or two for my home down the road to make up for the exercises I can’t do with the Wii.

Do you think you enjoy playing more now that you have a weight loss goalin mind or does it start to feel like a chore?
In the last several months I haven’t really had time to play video gamesin general, I’ve been extremely busy. So setting time aside each day tobe able to workout on the Wii really gives me an excuse to play video games without feeling guilty about it. So no, I actually really look forward to it now.

With all the attention you’re getting, do you find most comments are positive or negative?
It really depends on who is contacting me. If they are emailing me (or calling me or talking to me to my face). The comments are 100% very positive. If they decide to be anonymous and hide behind the anonymity of the Internet, about half the time they’re negative. It’s just really thenature of the Internet. People are very positive about it in general though. 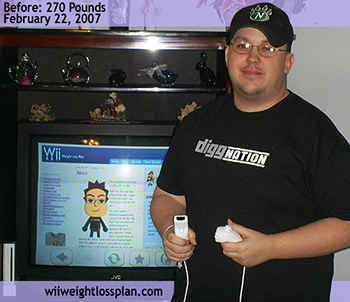 What suggestions would you make to the designers of the system or games to improve playability? Improve weight loss?
I’d love to see Nintendo bring back the old NES pad. The one that you used for those Track and Field games where they had you running in place, doing long jumps and everything else. If Nintendo could find away to incorporate feet work into their games along with using the motion sensor controller just imagine the possibilities. You could run back and forth to hit that tennis ball instead of the computer doing it for you. You could run a race, run a route in football, dribble and shoot in basketball, outmaneuver your opponents.

I would like to also see them create some games geared toward fitness.Something to get people moving and doing exercises yet at the same time rewarding them with challenges they have to beat to score higher.

Who else is doing this now?
I’ve seen some sites pop up since I started doing this. Jared King over at Nintendo Fat Camp started doing it. I’ve seen a site called Wii healthy that just recently popped up. I’ve had many many people from all over the world email me and tell me they’re doing this on their own and finding results as well and asking me for advice. It’s starting to become a phenomenon. Mickey DeLorenzo of the Wii Sports Experiment also has teamed up with Traineo and created a Wii weight loss group there as well.

And finally, what are the best Wii games for weight loss?
Right now, only one. Wii Sports. I’ve tried others and none of them give a workout like Wii Sports does. However, I also recommend purchasing the DDR pad for the Gamecube and getting the Gamecube version of DDR [Dance Dance Revolution]. You can plug that into your Wii and play it too and it also will give you a fantastic workout. Not a Wii game, but at least it’ll be a nice change of pace from Wii Sports :)

So, what questions do you have for JR?

3 thoughts on “Interview with J.R. Cook”