This morning, the following quote was overheard. “oh, he’s here, but probably in search of a bagel”. Now that only sounds strange until you realize our office provides donuts and bagels on Fridays. Which will also start to include fruit and yogurt it seems, but that’s another story.

So from that simple phrase, “in search of a bagel” I suddenly remembered an old show I used to watch. 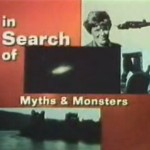 In Search of… was a TV documentary series that was broadcast weekly from 1976 to 1982. It was created after two successful hour long TV documentaries, In Search of Ancient Astronauts in 1973 (based on the book Chariots of the Gods), and In Search of Ancient Mysteries in 1975 both with narration by Rod Serling. After the untimely death of Serling, Leonard Nimoy was chosen to be the host of the spin-off series.

As I remember it, the show was a kind of “America’s Most Wanted” investigative show that was In Search Of… answers to various mysteries like The Bermuda Triangle, Bigfoot, the Mayan People and Amelia Earhart’s plane. It was looking for the extreme pseudo-scientific and paranormal topics but had a serious tone to it. Thus it’s great appeal to a young boy such as myself.

The production values were fairly typical of the period, with the interviews, reenactments and scene footage all shot on film and usually voiced over by Nimoy. Because of the “questionable” evidence, each show had this disclaimer which, to me, added a sense credibility.

This series presents information based in part on theory and conjecture. The producer’s purpose is to suggest some possible explanations, but not necessarily the only ones, to the mysteries we will examine.