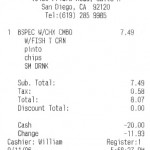 After much build up and soul searching, I finally broke down and did it. I finally used the name of all names at Rubio’s.

Several months ago (seems like years) I learned that Rubio’s can’t spell my name right. Many of you know my name so you are probably shocked to hear that anyone would have trouble with it but for those of you who don’t know – it’s Luke. I could reminisce about all the various ways they miss spelled it but after a few tries I started experimenting with different names only to find it isn’t limited to my name. Strangely enough, the more bizarre the name, the closer they got. For example, Jose – WRONG, Toast – CORRECT! (I have proof).

So after taking some suggestions I finally decided to break down and use the name that causes grown men to tremble and women and children to weep. That’s right, I said _______! I did not act all indignant as planned because that would be too cruel. And besides, the young lady behind the counter was such a good sport about it.

Now it’s around 6pm so the restaurant is pretty empty (they cater to the 9-5 business crowd here) yet I was surprisingly nervous about giving them this name. I placed my order and when she asked my name I said “_______” expecting a questioning look or a blank stare (or worse). Instead, she quickly gets busy typing away on the touch screen. About half way through, she starts to giggle – ah, she finally catches on. Now the wheels are in motion, and while I managed to follow through on the name, I know I can’t get all “in your face” when she calls it out. But maybe I can muster up the courage and do it after all. I practice it in my head “What’d you call me?” or maybe just a shocked “Excuse me!” but in the end I chickened out. It was kind of hard when she giggled again as she called out the infamous name – she was enjoying this as much as I was.

So what was the name? Click on the image to see a larger version to find out. The down side of all this is that the next time I went, the idiot behind the counter called me skywalker – I hate that.

4 thoughts on “I finally did it”