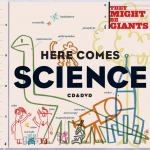 On the heels of the Grammy winning ?Here Come the 123s? They Might Be Giants have created a new album of songs related to science. The entire album has been fully animated on a second disc that comes with the specially priced set. Here Comes Science (Amazon.com Exclusive) [CD/DVD]

For me, this is great news. I’ve been a big fan of They Might Be Giants (TMBG) for about 20 years now and really enjoyed their previous kids’ albums Here Come the ABCs

. More importantly, Corbin loved them. These two DVDs were the only children’s shows that would cause Corbin to instantly stop what he was doing and hold his attention from start to finish. He would literally stop what he was doing and hold the same position and facial expression the whole time the DVD was playing. He’s since grown out of that but on those occasions when you needed to keep him out of the kitchen or needed to calm him down, these were life savers.

So it’s no surprise that we’d be equally excited about a new “Here Comes…” DVD from TMBG. Unfortunately, I do have a reservation about one or two songs. Specifically, track number six – My Brother the Ape. Simply put, Evolution is not science, it’s a faith. I do not believe that the earth is millions of years old, nor do I believe we are descended from apes (or any other animal). Setting aside my Creation beliefs, the real problem I have is the lack of evidence. I know, I know, “but what about all the findings and carbon dating?” you say. But let me explain how this is an issue…

Evolution and the Earth’s age are based on flawed science. Primarily, Carbon Dating as a means to determine geological age. The problem is, the rate of decay is assumed to be constant and the accuracy of the measurements is typically too broad (meaning the margin for error is too big to rely on). Since this is not a topic you and I are not likely to have a large background in, I’ll lead you to the RATE Project for further reading.

The other big problem is the assumption that the fossil record does in fact show an evolutionary chain. But in reality, it simply shows a variety of species that have similar characteristics. The ‘lineage’ of these creatures relies on inaccurate carbon dating. Worst yet, is that dating the fossils is circular in its method. They date the geological level and assume fossils found in that “level” are the same age. Then any other fossils found are assumed to be of the same age without testing the samples directly. Again, I don’t want to get into the details but you can read more about it here.

So what are the songs? Well here are the titles:

The album is produced by TMBG and Pat Dillett, and was record in downtown Manhattan! Oh, I plan on getting the CD/DVD, I’ll just be sure to explain that not all science is equal and a lot of it is based on stronger faith than I have. Before you comment, ask yourself this: Since evolution can’t be proven, why do some people insist on making everyone believe it? I know what motivates creationists. What motivates your beliefs?

One thought on “Here Comes Science”