I’ll try to avoid the usual puns regarding the name but I thought I’d take a moment to tell you about my new phone. This won’t be an exhaustive review because quite frankly, I haven’t played with it enough to tell you all the details. But I will tell you this, I like it.

It’s not hard to impress me considering the old phone (LG VX8300) that my new Motorola Droid replaced was three and a half years old. In fact, this is my first foray into the PDA/Smartphone category so it’s a whole new world for me. That said, there are plenty of reviews to compare the Blackberry Storm2 and the Apple iPhone to the Droid but my experience is limited to my phone – so that’s what I’m going to share. 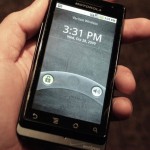 First off, the phone is pretty intuitive to start with. Once activated, turning it on is a simple push of the button and a flick of the finger. The button, which is semi-recessed to avoid accidental pushing, “wakes” the phone while flicking the padlock icon unlocks the phone. Told you it was intuitive. 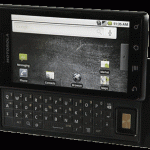 The home screen comes loaded with some basic shortcuts (icons) to help you get started. There’s the phone (direct dialing) and the contacts (phone book), the browser and maps icons for, you guessed it, internet and navigation. There was also an icon for the Android Marketplace where you can install free or paid apps (think plugins or small programs that run on the android OS). And finally, messaging – which I trashed since I don’t text anybody.

There are a couple main reasons I chose the Motorola Droid over the Blackberry Storm2 and these may not be relevant or important to you so don’t read into this if you prefer the Storm2.

I love the larger screen. Features are important but the bigger screen (and higher resolution) helped put Droid over the top.
Google integration. This may be a problem for some paranoid types but using my Google account info for my phone was a nice feature.
Built in navigation at no extra charge. Since it’s a Google phone (runs on Android OS) it uses Google maps.

Integrating Google is real easy but updating my contacts was not so much. it wasn’t hard, just wasn’t expecting it to work this way. As I said, my old phone was just that, a phone. It had limited web capabilities but I never opted for that plan so I never used it. What I did use was the Get It Now tool which allowed me to download tools and features to my phone such as ringtones and games. 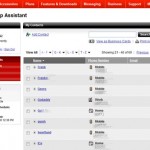 One such tool was the Backup Assistant which basically backed up your phone book to your Verizon account so you could upload it to your phone if you ever replaced it. This worked great fo backing it up, but the Droid is not a “Get It Now” phone so it didn’t work. No worries, when I synchronized my Google account with my phone, it imported all my contacts. Only problem was, My Contacts typically didn’t include phone numbers just emails and some addresses.

A quick search later and I had the solution. Export my Backup as a CVS file and upload that to my Google Contacts list. Of course, now I have two (or more) entries for most of my contacts (one email and one number) so I spent some time merging duplicate contacts until a had one entry per person. A little time consuming but relatively easy and safer than being too automated. plus, it forced me to clean up my contact list – like when I would have multiple emails for the same person under different names (Bob@work, Bob@home, Bob@school, etc). Now I just need to get profile pictures for everybody, but that’s a different story. 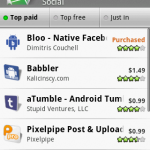 After that, it’s all about the apps. And let me tell you, if you’re not familiar with using apps, it can be quite daunting. There are apps for everything from playing games to managing documents to switching themes – some free, some you buy. There are serious apps for improving your phone and silly apps for just being silly. And even if you figure out what you want, just try picking the one app that does it from the dozen or so choices. Don’t believe me? Search for “flashlight” in the Android Market and see what I mean.

Luckily, it’s pretty easy to uninstall anything you don’t like but wading through the choices can suck up a lot of time. There are a lot of Top 10 Droid lists out there so start with those and see what works for you. I don’t Tweet or Facebook or Text so many of the top apps aren’t for me. But I do Blog and other things which do have apps that work for me. I’m still sifting through the choices so I’ll follow up with a list of my favorite apps. Feel free to make suggestions but understand, I won’t be downloading anything that makes silly sounds or pretends to be an electric razor.

Here’s a couple links to help you get started with your new DROID phone.
Verizon DROID Support
Motorola DROID Support