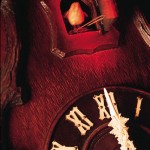 When do we change our clocks?
Most of the United States begins Daylight Saving Time at 2:00 a.m. on the second Sunday in March and reverts to standard time on the first Sunday in November. In the U.S., each time zone switches at a different time.

A writer in 1947 noted, “I don’t really care how time is reckoned so long as there is some agreement about it, but I object to being told that I am saving daylight when my reason tells me that I am doing nothing of the kind. I even object to the implication that I am wasting something valuable if I stay in bed after the sun has risen. As an admirer of moonlight I resent the bossy insistence of those who want to reduce my time for enjoying it. At the back of the Daylight Saving scheme I detect the bony, blue-fingered hand of Puritanism, eager to push people into bed earlier, and get them up earlier, to make them healthy, wealthy and wise in spite of themselves.” (Robertson Davies, The Diary of Samuel Marchbanks, 1947, XIX, Sunday.)

There are those who do not like Daylight Saving time. They note many examples as to why we should abandon this archaic system or how counter productive it truly is, but I am not one of those people. On the contrary, I’d like to do away with Standard Time. Put that morning light back at the end of the day when I need it most. Of course, I think we should have thirteen months with 28 days each but that ain’t going to happen either.

As Marvin Chester put it; The business day centers around 1 pm. But the hours of daylight center around 12 noon. By ancient tradition noon means mid-day. It divides daylight. For the ancients artificial light was scarce. Their noon divided both the business of the day and the light of day.