Corbin is now 22 months old (has been for a couple of weeks now) and he still surprises me with every new skill. Most things are subtle and are only noticeable in contrast to what he used to do/say. He’s beginning to put two words together which sounds easy but for a child, that’s a major leap. He still doesn’t say “milk, please”, but he’s starting to put other combos together (just barely).

He’s also beginning to understand more complex things we say. We used to have to use simple one-word instructions like “milk?” “teeth” and “hug” to ask if he wanted milk, brush his teeth or give us a hug. Now we can tell him to pick up several things, where to put them and what to do next all in one command. he also relates things that used to be separate in his mind, but I assume that’s related.

As I mentioned last week, we picked up a playhouse/climber/slide thing. Well Julia set it up at grandma’s and Corbin took to it quite nicely. When he was smaller, he used to enjoy going down slides. Then one day, he suddenly stopped. in fact, he seemed a little afraid of them. he would climb to the top and act like he wanted to slide, but would scream in protest if you tried to get him to actually go down it. I think he’s warming up to slides again with his new play structure. 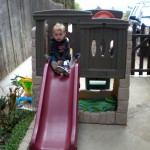 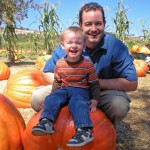 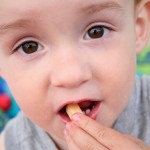 This past weekend, we went to Bates Nut Farm Pumpkin Patch. Last year we we to Oma’s Pumpkin Patch so we thought we’d try something different this year. And different it was. After driving north about an hour, past the San Diego Wild Animal Park, and just before Boku Casino and through some very windy country roads, we come over one more slight hill to see a very large and very crowded dirt parking lot – complete with parking lot attendants directing traffic. Luckily we found a nice shady parking spot and happened to park near the Morelands who we were planning to meet there (they were still unloading) – what timing!

Everything was pay-to-play so you only had to pay for what you did and the prices were on par with the local fair. In fact, it felt very much like a small version of the county fair. As many people as there were, it wasn’t crowded but it wasn’t casual either. There was ample room to move around but there were people everywhere. Over all, we enjoyed it but I think we’ll look for something a little more relaxing (and close to home) next time.