Recently received in my inbox. Regardless of your feelings about Christians, persecution and violence is wrong. 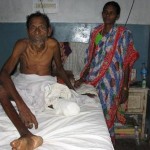 Dear beloved sponsors and friends of Good News India. We have never seen anything like this. We knew that Orissa was the most resistant and hostile State in India as far as the Gospel is concerned. And we brushed off the continuous threats and harassment we faced as we went about His work. But none of our staff imagined that they would see this kind of carnage…. And it seems to be totally under the radar of the Western Media ….

Let me explain…. A militant Hindu priest and 4 of his attendants, who were zealously going around the villages of Orissa and ‘reconverting’ people back to Hinduism, were gunned down by unknown assailants in Central Orissa last weekend.

Immediately the Christians were blamed.. The cry rose up…’Kill the Christians!’ And the horror began…. In the past 4 days, we have first hand witness to hundreds of churches being blown up or burned and many, many dozens of Christian tribals have been slaughtered. For no other reason than they bear the name of Christ.

Night and day I have been in touch with our Good News India Directors spread across 14 Dream Centers in Orissa… they are right in the middle of all this chaos. In Tihidi, just after the police came to offer protection, a group of 70 blood-thirsty militants came to kill our staff and destroy the home. They were not allowed to get in, but they did a lot of damage to our Dream Center by throwing rocks and bricks and smashing our gate, etc.

They have promised to come back and ‘finish the job.’ Our kids and staff are locked inside and have stayed that way with doors and windows shut for the past 3 days. It has been a time of desperately calling on the Lord in prayer.

More police have come to offer protection. In Kalahandi, the police and some local sympathizers got to our dream center and gave our staff and kids about 3 minutes notice to vacate. No one had time to even grab a change of clothes or any personal belonging. As they fled, the blood thirsty mob came to kill everyone in the building. We would have had a mass funeral there, but for His grace. In Phulbani, the mob came looking for Christian homes and missions. The local Hindu people, our neighbors turned them away by saying that there were no Christians in this area. So they left.. We had favor. The same thing happened in Balasore.

All our dream centers are under lock down with the kids and staff huddled inside and police outside. The fanatics are circling outside waiting for a chance to kill. Others were not so fortunate. In a nearby Catholic orphanage, the mob allowed the kids to leave and locked up a Priest and a computer teacher in house and burned them to death. Many believers have been killed and hacked into pieces and left on the road…. even women and children. At another orphanage run by another organization, when this began, the Director and his wife jumped on their motorbike and simply fled, leaving all the children and staff behind. Every one of our GNI directors that I have spoken to said: ‘We stay with our kids…. we live together or die together, but we will never abandon what God has called us to do.’ More than 5000 Christian families have had their homes burned or destroyed. They have fled into the jungles and are living in great fear waiting for the authorities to bring about peace. But so far, no peace is foreseen.

This will continue for another 10 days…. supposedly the 14 day mourning period for the slain Hindu priest. Many more Christians will die and their houses destroyed. Many more churches will be smashed down. The Federal government is trying to restore order and perhaps things will calm down. We ask for your prayers. Only the Hand of God can calm this storm. None of us know the meaning of persecution. But now our kids and staff know what that means. So many of our kids coming from Hindu backgrounds are confused and totally bewildered at what is happening around them. So many of their guardians have fled into the jungles and are unable to come and get them during these trying times.

Through all this, I am more determined than ever to continue with our goal: the transformation of a community by transforming its children. Orissa will be saved… that is our heart’s cry. If we can take these thousands of throw-away children and help them to become disciples of Jesus, they will transform an entire region. It is a long term goal, but it is strategic thinking in terms of the Great Commission. What can you do? First, please uphold all this in fervent prayer. Second, pass this e-mail on to as many friends as you can. We must get the word out and increase our prayer base for this is spiritual warfare at its most basic meaning. We are literally fighting the devil in order to live for His Kingdom. The next 10 days are crucial. We pray for peace and Thank you for taking the time to read this.

More info can be found at www.efionline.org and YWAM

2 thoughts on “CHRISTIANS, MISSIONARIES in INDIA”