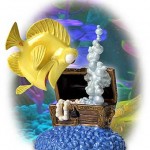 A while back, we picked up a used Fisher-Price Ocean Wonders Aquarium Bouncer on Craig’s list. Even though I checked to make sure it was working, I didn’t notice that the bubbles didn’t work. So instead of a soothing display of bubbles every few seconds, Corbin was exposed to a violent sounding whine of the motor spinning. He didn’t seem to mind, so neither did we. But that’s all changed.

I fixed the bubbles. Saturday morning, while Julia got to sleep in, I took apart the bouncer so I could see why the bubbles didn’t work. Turns out, there is a motor that spins, which is connected to a pump wheel by an elastic belt (think rubber band). Problem was, the belt was too stretched out to turn the pump (like a water gun has). So I fixed it. 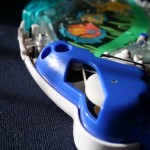 I started by removing the white housing. It’s two faces of the aquarium held together by a billion screws (more like ten) Don’t worry, the actual aquarium (water) is a sealed part of the device and doesn’t come apart when you remove the screws. Now technically you could fix it from here but since I’m not a gremlin, I can’t reach into the small exposed space. thus, I also removed the blue housing from one leg. I’ll let you guess which leg. With both the white and blue housing removed, you can easily access the white plastic band that connects the motor to the pump. Simply flip (rotate) the one end so that you have created a figure eight with the elastic band. This creates just enough tension so that the motor turns the pump wheel. If it doesn’t, try a different band. 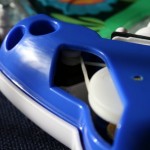 When re-assembling the housing, be sure not to over tighten the screws. The first couple of tries, I over-tightened the screws and the pump wheel couldn’t turn. The best part of this (besides getting the bubbles to work) was that my 3-month old son Corbin watched intently all the work I did. Don’t worry, he was safely away from any actual tools. But now he has an ingrain image of his father as Mr. Fix-it.

One thought on “Bubbles!”