Boosters are a GO! 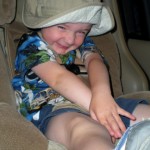 Corbin is at the size where we need to consider moving him to a booster car seat. California Law allows children over 40 pounds to use a booster seat used with lap and shoulder belts. He can’t use just the lap and shoulder belts until he is 60 pounds. At his last appointment, he weighed in at 33 pounds and 37 inches. Now he is currently in the Britax Boulevard which is rated up to 65 pounds and a standing height of 49 inches, so he still has room to grow but Benjamin probably won’t last as long in his car seat.

Benjamin is using Corbin’s [now-discontinued*] Britax Companion infant carrier and while he easily fits, he doesn’t seem to enjoy it the way Corbin did. We’re not sure why, but we suspect he gets too hot because the material doesn’t “breath” enough for him. Corbin loved it when he had it but he was also a winter baby so the extra heat may have been good to him. Corbin also outgrew it around the 6 month mark so never had to use it in the summer heat.

So…
While they both have room to grow, I’m thinking it may be a good idea to move Corbin up to a convertible booster like the Britax Frontier 85 Combination Booster Car Seat now, and move Benjamin into the Britax Boulevard. This should address a couple things;
1) Corbin is big enough to get into his seat by himself, he just has trouble climbing up and over the high-based seat. The Frontier has a lower base and no “wings” on the sides, just armrests.
2) Since we don’t carry Benjamin around in the infant carrier anyway, putting him in and taking him out won’t be much different than it is now, plus he likes to be more upright than the infant carrier allows. But the real benefit is that the car seat’s fabric will be more comfortable (in theory) and thus keep him cool enough to enjoy the ride.

Of course, safety is priority number one (which is why we’re willing to pay a premium), so we won’t make the switch unless everyone is physically ready, including us. Corbin (33 lbs) can already make the switch since the Frontier is rated for 25 to 85 pounds as a 5-point harness and 40 to 120 pounds as a belt-positioning booster seat. The Boulevard is rated 5 to 35 pounds rear-facing and 20 to 65 pounds forward-facing (and 1 year old) so Benjamin should be ready too.

We’ll conduct a couple of usability tests this week and see if it’s practical to make the switch, then we’ll decide if we move forward or rethink our strategy. In the mean time, take a look at the multiple positions of the Frontier 85 below. Oh, and if anyone is feeling extra benevolent, we like the “Canyon” color best. 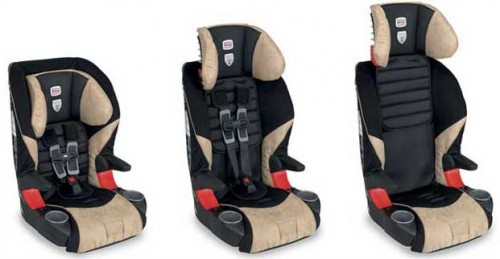