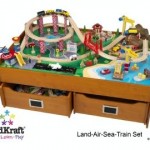 Just after 7am this morning, Corbin woke up to a wonderful surprise – ergonomics!

Last night, around 8:30pm I drove 45 minutes to meet a man about a train table. $60 later, we were the proud owners of a Kidkraft Land, Air, Sea Train Table Set (minus a few pieces). These tables typically cost around $117

and the trundle drawers cost $52

each. So getting the set for $60 was a great deal. Throw in a train set and it’s a steal.

Now, as I mentioned, there were some missing pieces. Mostly loose accessories but there was one critical piece of the track that was missing but I should be able to get that from the manufacturer easily enough. In the mean time, I managed to Jerry-rig it last night so that Corbin could start playing this morning. He started at 7am and played with it non-stop until 9am when the spiral section failed. Julia cleaned up the destruction and he went right on playing until about 11am. Previously, he would only play for a few minutes because scooting around on the floor just isn’t much fun for a big kid like Corbin. Standing at a train table is the only way to go.

I’ll still keep my eyes open for more used tracks and accessories, but getting the train table is a big relief – for all of us.

3 thoughts on “All aboard”