When I first launched this site, I had high hopes of reaching lots and lots (and lots more) people with my witty, insightful, honest writing. Turns out, I was just more noise and I wasn’t even a very loud noise at that.

Things have chanced since then. I get a lot more traffic now-a-days and what surprises me most is what that traffic is for. I’ve discussed it before so I won’t harp on that but with the recent addition of some flash-based games, I am now growing my visitor stats quite rapidly. Unfortunately, my standard visitor tracker (statcounter) has a 100 visitor limit which I exceed by 2,500 unique visitors daily. So the stats have become irrelevant because the top pages never really change.

As a result of this visitor log limitation, I’ve pretty much stopped tracking my stats – until now. Introducing Clicky Web Analytics. This free web traffic tracker is a little more polished than statcounter and integrates with my WordPress install. And unlike Google Analytics, it tels me useful information like who came, where they went and how long they stayed (Analytics isn’t visitor specific – Statcounter is). 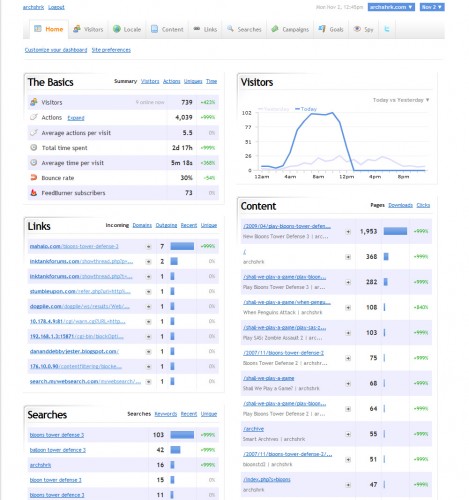 In other site related news, I’m trying my hand at LinkWithin‘s related posts plugin – again. I tried it a while back but after several days, it still didn’t show any related posts but it seems to have fixed that issue (somehow) so it now works on my site. The plugin/widget simply adds the “You might also like:” thumbnails at the end of each post. This is similar to the Similar Posts plugin I use but with a couple of differences. One being the thumbnail preview for posts with images. That’s a pretty cool feature. Unfortunately, the LinkWithin plugin is less customizable and seems to link less related posts than the Similar Posts plugin. So for now, i’ll use both and see if the new one gets smarter. Ideally, they would merge and I’d get the best of both plugins. Let me know what you think.